GRISO is an international, open network of scientists interested in working together to address the large, complex questions associated with recent changes in the Greenland Ice Sheet, and its impact on the surrounding ocean (including the marine ecosystem), the atmosphere and communities living around Greenland's coastal margins. 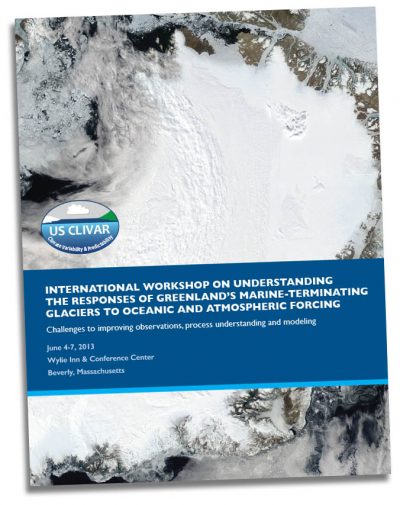 GRISO started as a US CLIVAR working group (GRISO WG), founded in 2011 and active until 2014, which aimed to facilitate interaction across the different scientific disciplines and to identify the key priorities for Greenland Ice-Ocean Interactions. GRISO WG organized an international workshop held in 2013 in Beverly (MA, USA) which brought together over 100 glaciologists, oceanographers, climate and paleoclimate scientists, as well as NSF and NASA program managers. Key conclusions from this workshop were summarized in a workshop report (PDF) commissioned by US CLIVAR, NSF, and the US Interagency Arctic Research Policy Committee (IARPC).

GRISO was subsequently supported by Study of Environmental Arctic Change (SEARCH)—a system-scale, interdisciplinary research program that seeks to connect scientists working on Arctic change with stakeholders and decision makers, from 2014 to 2016. During this time, a second international workshop was held in San Francisco (CA, USA) in 2015 to define the steps necessary for the creating of a Greenland Ice-Ocean Observing System (GrIOOS) around Greenland, summarized in the workshop report.

From 2017 to 2019, GRISO was supported by an Earth Cube Research Coordination Network Grant from the NSF. During this time a third, international workshop was held in Washington DC (USA) in 2018 on the theme 'Freshwater Fluxes from Greenland' aimed at bringing together communities interested in quantifying the exchange of freshwater between the ice sheet and the ocean. Results from that workshop are summarized in the workshop report.

Starting in 2020, GRISO - a project funded by the National Science Foundation ACCELNet program - aims to facilitate the interaction of the large number of networks, associations and individual groups on problems relevant to climate change occurring at Greenland's marine margins.